A nearly 2% pullback for the S&P 500 shouldn’t be of much concern. The fact that index had risen for five straight months prior to the pullback suggests a bit of profit-taking was overdue.

But it’s the violent nature of the late-month sell-off that has everyone’s attention. What first began as weakness in small caps is now spreading to mid- and large-cap stocks.

The question on everyone’s mind: Is the market headed for more severe dips in the weeks and months ahead, or is this just back-filling on the way towards fresh new highs? To answer that question, let’s look at the market's push and pull factors and see where they could lead us.

In recent weeks, there has been some concern that the U.S. economy remains on unstable ground. In a few instances, we saw mention of a possible recession in the U.S. in coming quarters. That view seems way off the mark. A wide variety of reports suggests that the U.S. economy is poised for GDP growth in the 3% range of the second half of the year, and perhaps in 2014 as well.

Key positives: Job growth remains robust, auto sales in July remained solid, and corporate profits are in decent shape (up 10% in the second quarter from a year ago, when financials are excluded).

On the negative side, the all-important housing sector can’t achieve liftoff, and industrial firms reported fairly tepid second-quarter results, suggesting the long-awaited boom in capital spending has yet to materialize.

Yet investors may be focusing on a pair of other factors that could derail the current bull market. The first is the timing of interest rate hikes. I still think the Federal Reserve will begin to raise rates a lot sooner than the consensus forecasts currently imply. And the market will likely experience more choppiness if that line of thinking comes into vogue.

But that shouldn’t spell the end of the bull market. The market can absorb higher rates because they are starting from such a low place, and in any event, rate hikes will be slow, not rapid.

The takeaway? Don’t fear the Fed, even if investors are a bit too complacent about this issue.

Speaking of interest rates, it’s hard to understand why the yield curve has not started to slope upward, which almost always happens when an economy is strengthening. Either the Fed’s ongoing liquidity spigot (it is still buying back bonds, after all) is keeping a lid on long rates, or the underlying economy is indeed troubled.

Investors are anxiously awaiting the end of bond buying in coming months to see if the yield curve starts to retake its normal shape. (Notably, even though safe bonds such as the 10-year Treasury are holding their own, junk bonds have been reeling in recent weeks, as they are poorly positioned for this phase of the economic cycle.) 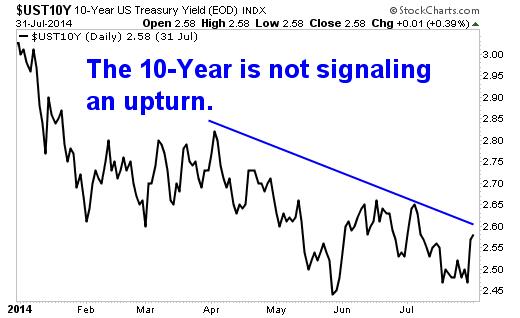 Another key concern for investors: Europe, which was a subject in a number of conference calls.

As I noted a few weeks ago, several major European economies are slowing down, and this is one place where recession fears are not misplaced. If Europe weakens further, it’s unclear if U.S. investors will shrug it off as being of little consequence to the U.S. economy -- or see it as a drag that puts pressure on many U.S. companies.

For now, most investors remain focused on the U.S. economy, which delivered another round of robust job growth in July. The jobs report -- which suggests that the economy is neither too hot nor too cold -- is just what the market needed, as it stabilized on Friday after a sharp plunge on Thursday.

Had the jobs report not been so benign, and the markets posted another strong drop on Friday, the stage would be set for an especially challenging week ahead.

A key concern: Margin debt levels remain too high, which can prove disastrous when the market starts into a selloff cycle. It’s not a deep concern, at least not yet.

Still, August is often a weak month for the market because traders usually seek to trim positions rather than add to them ahead of their vacations.

The one major risk to this market is a cycle of selling that leads to a herd mentality -- and margin calls.

Risks to Consider: As an upside risk, an ongoing rise in buyback and dividend activity continues to provide an impetus for stocks, and as long as Europe doesn’t weaken further, the rising U.S. economy could lead investors back towards an optimistic tilt again.

Actions to Take --> Add up all the headwinds and tailwinds, and the action plan becomes confusing. That argues for a strategy of standing pat -- watching and waiting to see how this current market wobble plays out. A few days ago, I noted that I'm watching the Russell 2000, which recently stood at 1,120. The 1,100 area is a crucial test of support, as dip buyers have emerged several times this year when small caps fell to that level. If dip buyers don’t step in the next time the Russell tests 1,100, it suggests that we could have further downside ahead.

How Did Warren Buffett Get Rich? 4 Key Stocks to Follow

5 Money Moves That Made Warren Buffett Rich Warren Buffett is perhaps the most famous investor in the world, amassing a fortune of over $80 billion during his lifetime. His ...

How Sean Quinn Went from Billionaire to Bankruptcy

Sean Quinn was once the richest man in Ireland. In 2008, Forbes estimated Quinn's riches reached $6 billion. Today, however, he owes Anglo Irish Bank $2.7 billion and in ...

After A Huge Sell-Off, Here's Where The Market's Heading

A nearly 2% pullback for the S&P 500 shouldn’t be of much concern. The fact that index had risen for five straight months prior to the pullback suggests a bit of ...

Suggested For You:
Featured Products: